July 02, 2018
I have decided to talk about something that I doubt many people will understand.   I would never have understood it before, but then we lost Madelyn and everything changed.   When people look at me with my children, they see a mother of boys.   I could not love my boys any more than I do, they are my world and they have pulled me through the toughest of times.   I’m proud to be their Mum and I love the rough and tumble and the cuddles that come with it, but I am not only a mother of boys.   I had a daughter, not for very long but I had her.   I grew her, I gave birth to her and I held her as life left her tiny body.   She was here and I am still her Mum too. When I was pregnant with Madelyn I did not mind whether she was going to be a boy or a girl.   Having had a son already, part of me thought it would be nice to buy girly things this time around but that had never been something I’d been particularly bothered about.   It certainly wasn’t something that I felt I had missed out
Post a Comment
Read more

May 16, 2018
The last time we saw our daughter was in the chapel of rest at the funeral directors, lying peacefully in her beautiful white coffin.    We declined the opportunity to see her at first.   Adam and I both felt that we wanted to remember her as she had looked when we left her in the hospital.   We were told we could visit her at the funeral directors on the Saturday after she’d died, but when we said we didn’t want to, my Mum went instead.   She called me afterwards and I was relieved to hear that Madelyn still looked the same as she had when we’d last seen her on the Thursday.   It gave me great comfort to know that her Granny had spent more time with her, a little less time spent alone.   Our meeting with the funeral director was on the following Monday afternoon, after what felt like a very long weekend.   That morning we had attended an appointment to register Madelyn’s birth and death, something I can’t really remember much of now.   I remember being early for our appointment,
Post a Comment
Read more 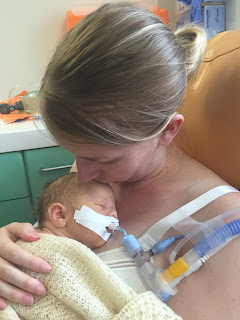 We spent the most precious moments with our daughter on her last day of life.  We waited impatiently for her body temperature to be warmed back up so that Adam and I could both share some skin-to-skin time with her.  When I eventually got to hold her against my skin I remember just feeling so relaxed with her cuddled in to me that I almost fell asleep.  It was one of the first “normal” moments that I had with her and I desperately pleaded for time to stand still so that our cuddle would never end.  I tried to soak in every detail of her; her smell, her hair, the softness of her skin.  I stroked her hair as I realised for the first time, how much of it she had.  It was so thick at the back of her head that I could gently twirl it around my fingers.  I thought about how I would have loved to do her hair in years to come, imagining her running in to nursery or school with her pig tails.  After she was placed on my chest and once the initial overwhelming emotions subsided, I didn’t c
Post a Comment
Read more 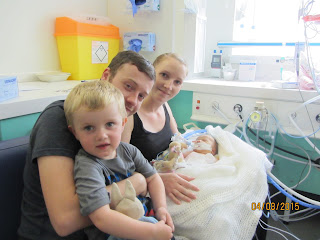 The relief I felt when the midwife told us that Madelyn had a heartbeat was very short lived.  I soon started to realise that a heartbeat did not mean that everything was going to be okay.  I was desperately piecing together everything that had happened during and after her birth, trying to work out how long she had been without oxygen.  No one could tell us anything more about Madelyn’s condition as she was still being assessed in the neonatal unit, and we were told we needed to wait until the consultant could come to speak to us.  In the meantime, we sat mostly in silence wondering if we should start letting family know what had happened.  I couldn’t cope with the thought of their reactions and my mind started to wander, almost frantically.  How were we going to tell everyone?  How were we going to tell Noah?  Was he ever going to meet his new sister?  How could I get the Flopsie bunny that Noah had wanted to buy for her?  I hadn’t had time to buy it, and now she might never g
1 comment
Read more 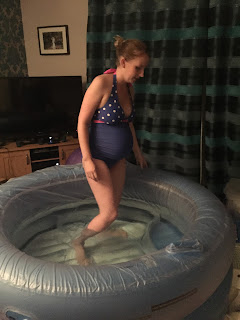 So, it’s taken me a lot longer than I’d hoped to add to my blog.  I’ve been torn between which part of life after baby loss would be best to start with after my last post, but I eventually decided the best place to start would be back at the beginning of this journey; when our beautiful girl was born. Madelyn was 6lb 6oz and was 46cm long, something not a lot of people know as they don’t tend to ask after your baby has died.  You also don’t really get the chance to share your birth story as you don’t really get asked about it.  I’m not sure if people think it’s inappropriate to ask these things when you didn’t get to take your baby home, or if maybe it’s just the sort of thing some people find too upsetting to hear about.  To be honest, I’ve taken a long time to decide whether I want to tell everyone Madelyn’s birth story because I’ve always been very conscious of upsetting or scaring people - especially those who may be expecting a baby themselves - but I want to share as much of
3 comments
Read more

Two Years Without Her 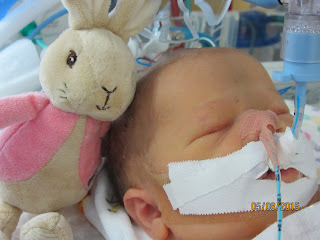 I decided to start this blog as a kind of therapy for myself.  Most bereaved parents tend to start blogging or writing down their thoughts soon after their loss, so I feel like I’m doing this a bit backwards but I need to start somewhere.  I’m not expecting a lot of people to read it - to be honest I’m not much of a writer – but I’m doing this for myself and if another bereaved parent happens to stumble upon it and it helps them in some way, that’s a bonus. Yes, it’s been two years since our beautiful Madelyn was taken and I’d hoped to be in a better place by now, but it’s still so hard to accept.  I know that part of that acceptance is the understanding that we will always feel her loss; that she will always be missing from our family, but that makes me so bitter and angry at times.  I miss her every minute of every day, and it upsets me knowing that my family miss her so much too, but a lot of my anger stems from the fact that she never got a chance to live.  She never got a c
3 comments
Read more